Vast networks of seismic lines that run through Alberta’s boreal forest boost emissions of methane, a potent greenhouse gas, from the region’s wetlands, according to a newly published study in the journal Nature Communications. These undocumented emissions would increase Canada’s national reporting of methane in the category of land use, land-use change and forestry by at least seven to eight per cent.

“We’re being conservative with that estimate,” says Dr. Greg McDermid, PhD, a professor in the University of Calgary’s Department of Geography and co-author on the study. “We suspect that the amount of emissions is actually higher than what we report.”

He adds: “What’s happening with oil and gas exploration is releasing more greenhouse gases than we previously thought. We should add this to our carbon accounting.”

The boreal region of Alberta is rich in both wetlands and bitumen deposits. These bitumen deposits make up Alberta’s oilsands, the third-largest oil reserve in the world. This landscape also contains an abundance of peatlands.

In order to locate bitumen deposits, the oil and gas industry has used seismic lines since the 1940s. Seismic lines are man-made petroleum exploration corridors, between two and 10 metres wide, that have been cut through the forest using heavy equipment.

“There are more than 1.8 million kilometres of seismic lines in Alberta,” says McDermid. “That’s enough to circle the planet 45 times.”

Seismic lines in the boreal forest have made an unexpected impact on the region’s peatlands, McDermid explains. Peatlands — wetlands that accumulate organic material — store about one-third of the planet’s soil carbon, more than twice as much as all the world’s forests combined.

McDermid and his team found that seismic lines release more methane than has been accounted for.

In cutting seismic lines, the soil of these peatlands is compressed, creating wet conditions close to the surface. This leads to boosted emissions of methane, a greenhouse gas with 25 times the global warming potential of CO2.

“It’s important to realize that all peatlands release methane,” McDermid says. “On the balance, though, natural peatlands accumulate more carbon than they release. But when you scrape the vegetation off the top to create seismic lines you disturb that balance. This can release carbon that has accumulated over thousands of years.”

McDermid’s team estimates that seismic lines increase methane emissions in Alberta by 4,400 to 5,100 metric tons annually. This is the CO2 equivalent of more than 27,000 passenger vehicles.

“This amount is relatively small compared to the 251,000 metric tons of methane generated by Alberta peatlands annually,” says McDermid. “However, the emissions we have revealed are not currently a part of Canada’s national carbon accounting, as mandated under the Paris agreement.”

McDermid notes that there are currently no legal requirements for restoring Alberta’s seismic lines, which can remain on the landscape for decades. “A seismic line was never meant to be a permanent structure,” he says. “It was originally believed, ‘This is the boreal forest, we’ll cut the lines, do our seismic exploration and move on. In a few years the vegetation will grow back.’ But as it turns out, this has not been the case.

“Peatlands are slow to recover,” says McDermid. “You scrape off the soil, which has developed over millennia, and now, instead of having a nice mossy surface where other vegetation may grow, you’re left with a long tunnel of water where nothing grows back. There are some seismic lines cut in the 1950s that look like they were cut last year.”

Seismic lines have been loosely regulated and there were never any laws or guidelines for restoring the peatlands, says McDermid. “This is an unintended consequence of oil and gas development. Now, the petroleum industry has to grapple with this problem. How do we erase these lines from the landscape?” 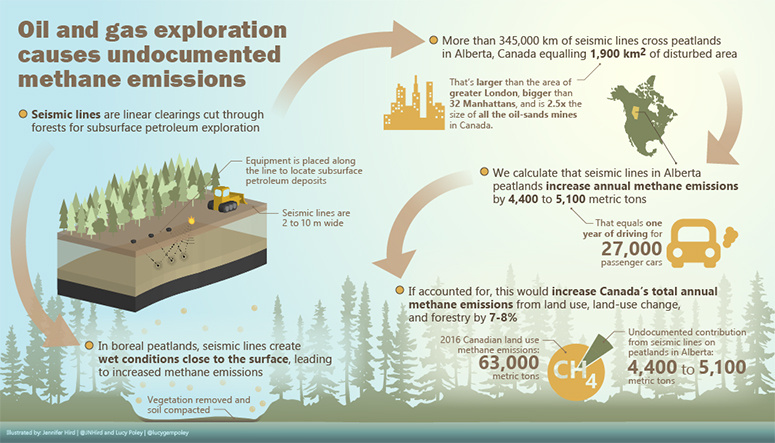